A little more knowledge about the popular Shawarma

Shawarma is a famous Levantine meat preparation. The meat includes that of lamb, turkey, chicken and many others. The meats are placed on a spit and it is grilled thoroughly. The grilling is very important to bring out the taste of the meat. Hence, it is highly crucial to grill the meat with care. In fact, it also maintains the temperature of the meat.

We cut thinner slices from the meat and then keep the rest to rotate on the rotating spit. This dish tastes great with a wrap or sandwich. Or you can also have this directly on a plate without a wrap. It tastes wonderful with cucumber, salads, tomatoes, tabbouleh and taboon bread. The toppings include hummus, tahini and Amba.

There are two main classifications of kebab. One is the shish kebab. The other one is the doner kebab. Now, both of them are entirely different from each other. The doner kebab includes Shawarma and Gyros. The cooking of meat on the vertical split is the common thing between these two.

What is the difference between Shawarma and Gyros?

The gyros are a Greek dish. Usually, it includes the pork or lamb. You may also get certain seasonings on top of it. The seasonings include oregano, thyme, rosemary and marjoram. It is ground into fine pieces into a loaf. The garnishes include onion, tzatziki sauce, tomatoes, garlic yogurt with dill and cucumbers.

But what about the Shawarma? Well, in this case, the meat is the lamb, turkey or chicken. It barely has a loaf, but chunks of meat in it. The seasonings include cardamom, cloves, turmeric and cinnamon. These also may have specific variations.

Garnishing this dish is what is really unique. It offers servings of tahini, hummus and sometimes pickles as well.

So, both the dishes fall within the same category, but are still different. 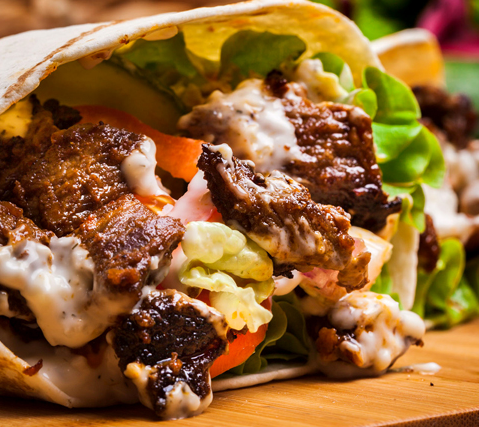 Many people refer the Falafel as wrapped sandwiches. It is because it has a coating of a pita bread around it. That looks like a pocket. But the stuffing consists of ground chickpeas. Hence, it is not only tasty, but also nutritious.

At Pita Plus, you will get the premium quality Middle Eastern dishes at affordable prices. The ambience is amiable and hygienic. So, that makes it the most reliable Pita Place for every food lover.

Get us Every Where